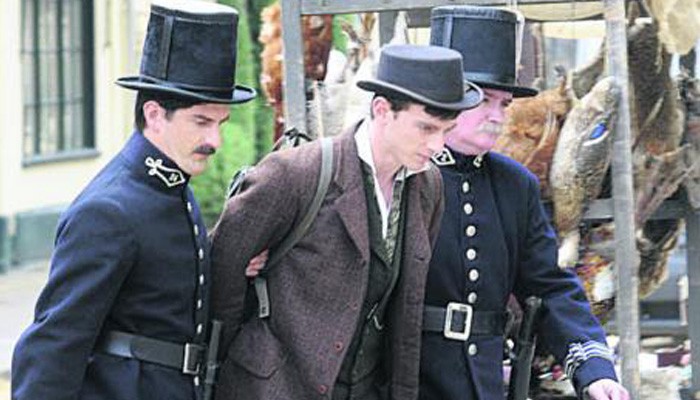 A swordsmith’s, courthouse and Victorian sweet shop can’t usually be found on Corsham High Street, but that all changed this week when it was transformed by second film crew this month.

Two weeks ago the street became 18th century Truro as the scenes were shot for the remake of the BBC’s Poldark, and this week it moved 100 years forward for the ITV Victorian drama The Suspicions of Mr Whicher.

Actor Paddy Considine, who plays the real-life Scotland Yard investigator, was in town yesterday and today, to shoot scenes for the fourth feature-length episode of the thriller.

Horses and carts went up and down the road, as the town hall was transformed into the fictitious Wainsbury Court House, while shop fronts were replaced to fit with the Victorian atmosphere. 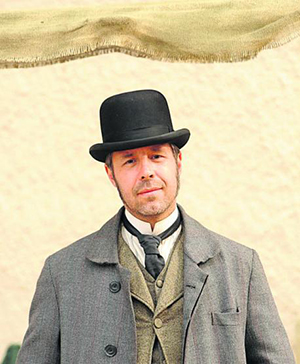 Paddy Considine, in Corsham for filming of ITV Victorian drama The Suspicions of Mr Whicher

Owner Daisy Coppin said: “Everyone who has been in has been excited, and keen to know what’s going on, it has definitely created a bit of a buzz.

“We were used for the Poldark filming as well, so over the last few weeks we have been a jewellery shop, a pawnbrokers and now we’re a musical instrument shop.”

Many local residents came out to watch the actors work. Shannon Messer, 17, who studies film at The Corsham School, said: “It’s really interesting, and nice to see it all old-fashioned.

“I was on set observing last week as well. I got speak to a few of the crew, and got a photo with Aidan Turner.

“I have been trying to get an apprenticeship or go to university to study film, so it’s been really interesting for me.”

Sue Groves, of Meriton Avenue, Corsham, went along to watch the filming with her family.

She said: “It has brought Corsham to life a bit, not a lot happens here normally.

“It has made me appreciate the beauty of the town.

“When you hear how they couldn’t go back to film in Cornwall because it didn’t look the same any more, you realise how lucky we are to have all these old buildings still intact.”